Mission Statement -
SERT is committed to the successful resolution of crisis situations by effectively using tactical operations, strategic maneuvering, and calculated responses.  A highly motivated well managed team is necessary to ensure safety of innocent people when emergencies arise.  SERT's purpose is to provide a trained and disciplined force that will function as a resource for the communities it's sworn to protect.  Ultimately, SERT will fulfill the promise to guard life and liberty for all citizens while completing each mission.

History -
Our team is referred to as SERT.  Other common names for this type of unit include SWAT, ERT, SRT, and SOU.  SERT was incorporated in 2001 as a Regional Tactical Team for the communities that make up the Seacoast area of New Hampshire.  A core partnership between the City of Portsmouth - Emergency Response Team (ERT) and the Town of Hampton - Special Response Team (SRT) merged 15 years of operational experience and equipment.  Together with nine other communities in the New Hampshire Seacoast they formed the present day team.  SERT drew upon the experiences of the two original core teams to develop the current team philosophy and procedures.  In addition to their normal police duties, team members are on call 24 hours a day 365 days a year to respond to critical incidents such as Hostage Situations, Armed Barricaded Suspects, High Risk Warrants, Woodland Searches or any other emergency situation that arises in the Seacoast area.  SERT provides a blanket of protection that serves more than 100,000 people living within our Seacoast communities.

Team Composition -
The Seacoast Emergency Response Team consists of 31 highly trained Patrol Officers and Detectives from 11 New Hampshire Seacoast Police agencies.  They have been selected to handle incidents that would require operations above and beyond the normal capabilities of everyday Police Services.  Our selection process consists of many phases beginning with a lengthy written test and moves to a demanding physical fitness test. Firearms proficiency is tested in both static and stressful shooting situations. There's a rigorous obstacle course, and an intensive oral board in front of the entire team.  Once selected, the new member is on a probationary status for one year.  During this period new members learn the procedures of the team and attend multiple speciality schools to prepare them for deployment at critical incidents. 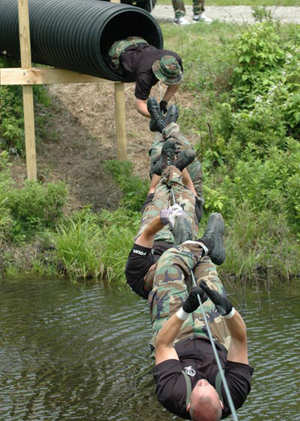 Currently, SERT trains twice a month, meeting standards set by the National Tactical Officers Association. Members are also required to pass a physical fitness test twice a year in addition to qualifying with their firearms regularly to maintain an operational status. Each member of the team has a specific duty which includes additional specialty training such as Entry Team, Sniper Team, Gas Cadre, Stealth Search Cadre, or Tactical Medic. Every year SERT attends a one week training evolution conducted at Camp Ethan Allen in Jericho, VT. The training evolution builds on tactical skills, marksmanship, and Team unity.

Some members of the team are certified trainers with the NHTOA and attend schools throughout New England and sometimes beyond.  In 2005 three of our SERT senior officers traveled to Los Angeles to observe and train alongside LAPD SWAT to enhance their skills and bring them back to teach the rest of the team.  During the year, SERT members participate in various SWAT competitions and have traveled as far as Orlando, FL to compete nationally in the annual SWAT Round-Up.  These competitions display the dedication and commitment to excellence that drives our team.  Continuous, repetitive training keeps all SERT operators sharp and fluid.  In the upcoming months and years SERT will continue to train and remain ready to answer the call when a crisis should arise.

Sierra Team -
Counter-snipers are deployed generally for information and intelligence gathering purposes. Sierra will also provide cover for the Entry team during critical incidents. Needless to say, training is of the utmost importance. Unparalleled accuracy with their equipment is always the driving goal.

Training with the entire team occurs on a regular basis. Additionally, Sierra uses all of its assigned equipment to maintain their proficiency by training on their own. Repetition and dedication prepare them for the next critical event that may arise. 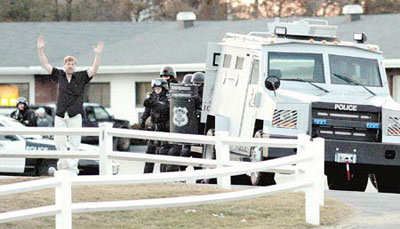 SERT incorporated the Portsmouth Crisis Negotiation Team as a component of the regional team and built upon their foundation. The current Team has grown both in size and experience. It's composed of approximately nine members. The Team has been successful in many incidents over the years. Several of those included suicidal and violent subjects.

Historically the Portsmouth Crisis Negotiation Team, was known as the Hostage Negotiation Team. It was originally formed in 1989. The Team became formalized in 1993, when Portsmouth Sgt. Len DiSesa was the team leader. With his later promotion to Captain, command was transferred to Portsmouth Lt. Champlin in 2000. It was subsequently reorganized to it's present form after being incorporated into SERT.

Critical incidents by their very nature can be hazardous situations for everyone involved. Everyone's safety is a primary concern when negotiations are underway. The safety of a suspect will always be a consideration; but, that doesn't take precedence over the safety of citizens or police personnel who have been placed in harm's way by the suspects actions.

The Crisis Negotiation Team makes every effort to formulate and utilize well thought out strategies based on established procedures. These strategies employ sound tactics and contingency plans. They include the development of personnel and equipment in order to achieve the safest satisfactory conclusion for everyone involved.